We Make You Look
GREAT IN PRINT!

Warren and Kenley Steinert received a rather unique Christmas gift from their parents - a 6 x 10 hand operated Kelsey printing press. Warren was 15 and Kenley was 12. With their small press, a few fonts of hand set metal type and a couple of tubes of ink, the Steinert Boys, as they became known, began printing stationery, cards, programs and other items for friends, acquaintances, churches and businesses around their hometown of Oshkosh, Wisconsin.

A business was born! 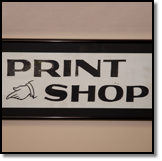 Work had to be done on weekends and evenings because school was still the number one priority. Soon the Kelsey press was outgrown, a foot pedal press was added for speed and more equipment was needed to meet the demand for larger jobs. The Steinert Boys added a 12 x 18 motorized platen press in 1948, another in 1949 and a linotype machine in 1950 to do type composition for their letterpress operation. The linotype machine gave them the ability to set type for other printers, including pulling many all-nighters doing linotype composition for Miles Kimball Company during the Christmas rush October through December.

Even more equipment was required.

In 1953, an automatic feed Heidelberg platen was added and in 1955 the first offset press, a 10 x 14 Davidson. They also added a 12 x 18 Little Giant cylinder press. Mom and Dad must have been getting a little crazy with all of this machinery packed into their basement! There were other challenges, too. The only door to the basement was the typical bilko, double cellar doors of the time. All of the equipment had to be completely taken apart and re-assembled to get it in. Try to imagine the 3,000 parts that made up the linotype machine all over Dad Steinert's garage before it was re-assembled down in the basement. Yikes! Paper stock was lugged down the narrow steps one package at a time and then lugged back up for delivery.

Out of the basement! 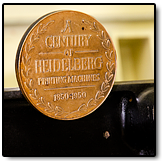 After graduating from high school, Warren and Kenley made a fulltime job of their printing business. By 1960, the basement shop was bulging at the seams and it was time to make a move. A 2,000 sq. ft. building was purchased at the corner of Eighth Avenue and Ohio Street. After 12 years of running the business out of the basement of their home, it felt pretty good to be on ground level. The business was still entirely family--just Warren and Kenley, with Dad as support in building tables and cabinets and Mom doing the packaging of finished jobs. Warren and Kenley's wives did the office work and whatever else it took to get the work out.

The new location was all it took for this small company to just take off. The mainstay was still fairly local commercial printing but soon music books for a publisher in Illinois and promotional materials for the Shakey's Pizza chain offered some seriously phenomenal growth. More presses were added; pressmen were hired as well as a camera operator and typesetter. The Ohio Street location served the company well for 15 years establishing Steinert Printing as one of the premier printing houses in the area. Quality and service were the keys the company was built upon. Jobs were done on time and satisfaction was the top priority. 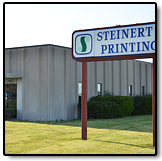 In the mid 1970s, more space was needed, plans were made and land was purchased on the west side of Oshkosh, just off Highway 41. In late 1975, a 10,000 sq. ft. building was constructed and the new facility opened in July of 1976. The new location for Steinert Printing offered the visibility needed to attract new business plus room to grow. The company now had the room to add more digital equipment and software, binding and finishing equipment, die cutters, foil stampers, embossers, full size cutters, and automatic padding equipment. The ability to provide this wide variety of services kept Steinert Printing growing. By 1992, they had eighteen employees and expanded by an additional 8,500 square feet to accommodate the growth.

The printing industry has grown in many different ways and Steinert Printing has grown with the changing times. Since taking over the reins in 2014 Mark and his wife Anne have remained dedicated to the growth and longevity of Steinert Printing. High speed, high quality color equipment makes it possible to offer the greatest value in digital short run products. Laser imaged conventional presses offer more value at higher quantities, too. Steinert Printing has made it their promise for 70 years and counting, to provide the expert advice, and the finest quality, resulting in the best value for all of their clients.

At Steinert Printing, serving our clients has been a family tradition since 1947.

Steinert Printing has consistently made conserving energy and recycling a priority even before it was cool to be "green". With our values and integrity leading the way, Steinert Printing was ahead of the times when it came to preserving the environment. We have continued the quest to keep our carbon footprint as small as possible and included in the following list are some of the ways in which we are achieving this endeavor.